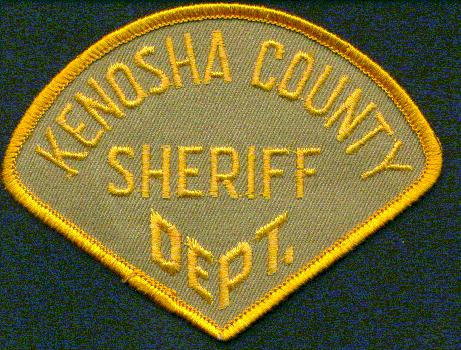 The 1950s saw a dark spot for the Sheriff’s Department as Sheriff Leonard Jensen was sent to jail for perjury and racketeering in 1952. U.S. Marshall Lyle Milligan was appointed sheriff by the governor and held that position through 1953 until an election was held. A young Kenosha news photographer by the name of Marshall Simonsen was elected to the position, which he held for one term. Affectionately known as Two Gun Simonsen and The Little Giant he stood 5 foot 6 inches tall and weighed in at 130 pounds. He wore a 10 gallon hat and a string bolo tie. In 1953, he drove a new sheriff’s squad to New York and appeared on a national television game show called Two For The Money. He won $150 and headed back to Kenosha to face the heat of the County Board. That may or may not have been his demise, but he was defeated after one term.

The 1960s saw several changes in the department uniform. The Ike jacket disappeared and patches were now placed on the uniform shirt. The standard Sam Brown belt was being used minus the wrap around strap. Supervisors with rank were added during the later half of the 60s. Up until the 60s, the rank structure was sheriff, undersheriff and night supervisor. Three lieutenants were added to be shift supervisors and sergeants were added to operate the radio desk.

In 1967, a county board resolution eliminated the politically appointed position of undersheriff to the tested civil service position of chief deputy. Jail overcrowding was starting to surface with the county jail being remodeled to house 60 inmates instead of 40. Civil unrest throughout the country led the department for the first time to purchase coveralls and riot gear to deal with anticipated riots. Written policies were now being developed but overall operations of the department still had not changed much from decades before.

By the 1970s the department was expanding and had two captains, four lieutenants and seven sergeants to command the staff of 61 deputy sheriffs. The jail started to house prisoners at the Milwaukee House of Corrections to deal with severe overcrowding. As a result a study was commissioned to build a new county jail, a jail that was supposed to last until the turn of the century.

Patrol operations saw the training of deputies to become EMT’s as the department was still performing rescue duties. That changed by 1978, when all rescue operations were turned over to the local townships. Uniform changes saw the standardized sheriff’s uniform patch give way to a custom made design for the department. The standard six pointed police cap turned into the familiar sheriff’s Stetson. The police shield gave way to a six pointed sheriff’s star and leather goods went from brown to black. Deputy sheriff’s were no longer jailer’s when in 1976, eight civilians became the new correctional officers to start the process of civilizing the detentions division. Construction was started on the new Public Safety Building in 1979 with the anticipated completion date of 1982. A dive team was activated to assist in search and rescue and evidence recovery.