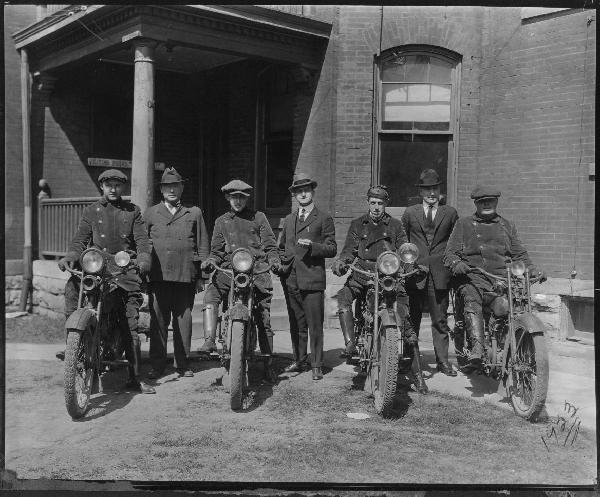 In the early 1920s, the Sheriff’s Department was a motorcycle patrol and a few poorly marked squad cars. Many of the county roads were not improved and provided difficult patrol area’s especially on the west end. The sheriff normally did not patrol the west end unless there was an actual call.

The sheriff lived at the jail with his family, uniforms were not uniform, radios (car or portable) were not yet in use and the only means of identification were the badges that were worn on the outside coat. In 1925, a new jail and living quarters for the sheriff was constructed behind a new county Courthouse, which increased the jail size to 40 beds. In the late 1920s, the department began to increase in size slightly to deal with the increase in crime.

The 1930s saw marked improvement in several areas: badges were made uniform and were worn on both the hat and outer coat of the officers and bow ties were standard apparel. The first shoulder patch was created and sewn by hand. It was placed on the left shoulder of the outer coat. Although these patches are sure to exist in the homes of the relatives of some of these officers, the department has only one of these hand sewn patches left in its possession.

Nash squads were the squad of choice as they were being produced in Kenosha. They were equipped with gun ports placed in the front windshields. Motorcycles were still the in thing for patrol, especially if you owned your own. In the late 30s, the formal instruction of safety education for school children started with Deputy Tom Jester. This was the early forerunner of the Deputy Friendly Program we now enjoy.

The 1940s marked a significant increase in growth of full time personnel to the Sheriff’s Department after World War II to approximately 25. The hand sewn patches were still being worn until approximately 1947, at which time the department changed over to a standardized yellow patch worn by many sheriff’s departments in the State of Wisconsin. They would now be placed on both shoulders of the outer coat. Neck ties replaced bow ties and the outer coat was now replaced by the popular "IKE" jacket as standard wear and leather goods included a "suicide strap," which crossed over the body from front to back.

Nash squad cars were still being purchased and were being used as rescue vehicles. The back seat and back wall to the trunk was removed. The patient was put into the squad through the trunk.