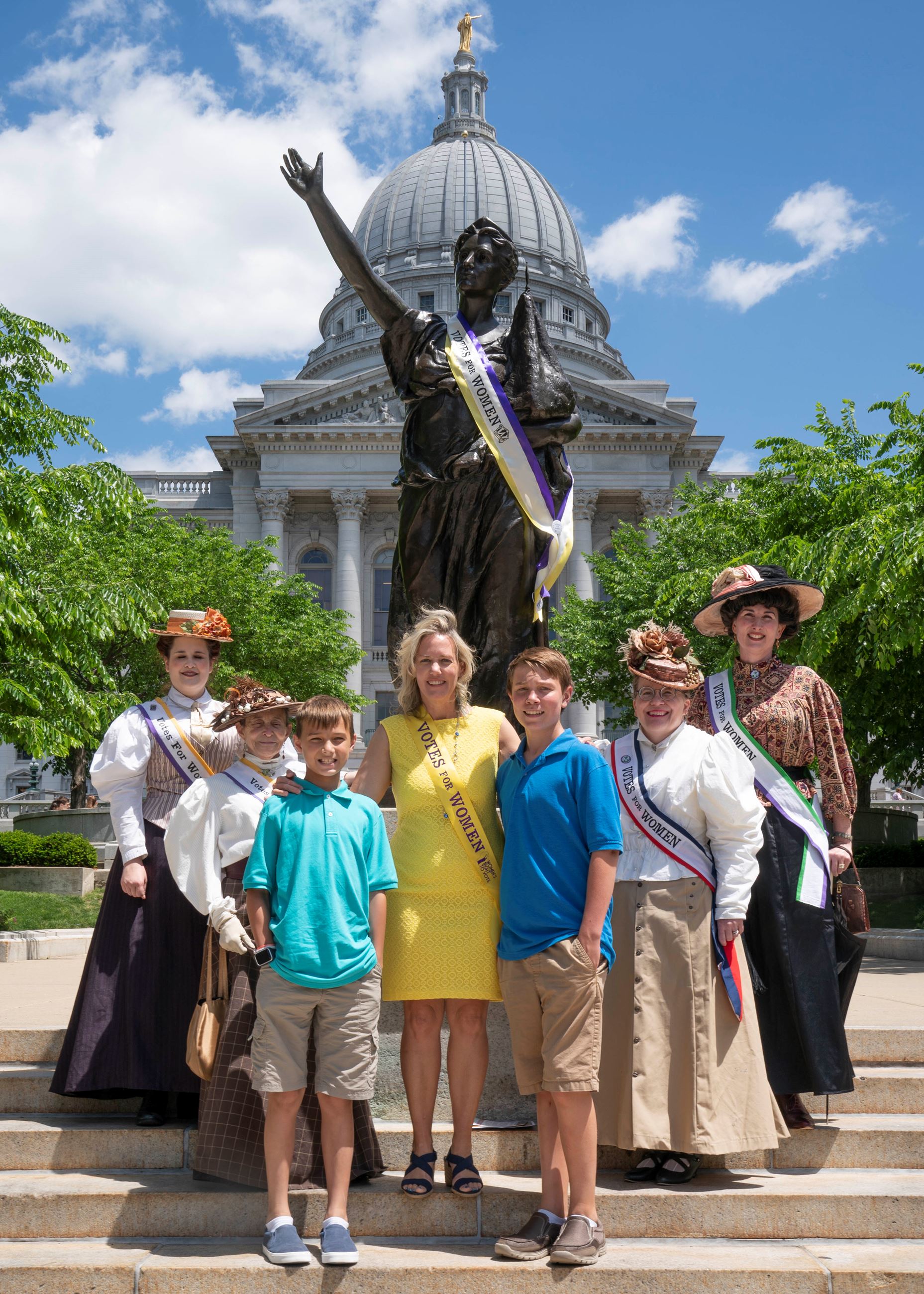 This is a special year in Wisconsin’s history – the 100th Anniversary of Wisconsin ratifying the 19th Amendment to the United States Constitution, giving women the right to vote.

One hundred years. A milestone, to be sure, but not such a long time. For perspective, consider current Wisconsin State Senator Fred Risser who was born only seven years after full ratification. Or Wisconsin State Representative Christine Sinicki who has been serving in the Legislature for one-fifth of the time that women have had the right to vote.

Although Wisconsin was the first state to ratify the 19th Amendment, that action was one of the last steps in the constitutional amendment process. The suffrage movement had been underway for 70-plus years and compiling a patchwork of successes.

In the plus column: The Wisconsin Legislature’s passage of a law in 1869 allowing women to run for school boards. Wyoming entering statehood in 1890 with suffrage laws already in place. Montana electing the first woman to serve in Congress in 1916. That’s right – a woman had been elected to and was serving in Congress before Congress managed to adopt the resolution that sent the 19th amendment to the states for ratification.

Altogether, it took Congress 41 years to get the job done – from first introduction in 1878 to adoption in 1919. Thankfully, 36 states acted with relative efficiency, and on August 26, 1920, the 19th Amendment to the Constitution was officially adopted and American women achieved full voting rights.

Wisconsin had its own share of bumps and setbacks in the road to suffrage. Despite allowing women to run for election to school boards, the Legislature stopped short of full suffrage and instead granted women in the right to vote in any election "pertaining to school matters."

The law was later essentially nullified when the legislature refused to allow local governments to place school offices and municipal offices on separate ballots. Wisconsin women regained their limited school suffrage in 1901 when separate school ballots were specifically authorized by the legislature. However, a 1912 statewide referendum for full suffrage failed with 63 percent of voters against and consecutive referendum attempts in 1913 and 1915 also failed leaving Wisconsin activists to turn their attention to the federal effort.

By the time the Wisconsin Legislature was presented with the Congressional resolution on June 10, 1919 legislators had accepted the inevitable outcome and all but two Assemblymen (George Ansorge, Oconto, and Robert Mutter, Racine) and one Senator (Herman Bilgrien, Iron Ridge) voted in favor of ratification.

As we celebrate Wisconsin’s ratification of the 19th Amendment this year, we also celebrate that the efforts and interests that brought women the right to vote also encouraged the recognition of women’s rights and expanded the space in which women are experts, decision-makers, and leaders of public discourse.

I am grateful to the first women "Assemblymen" in the Wisconsin Legislature – Mildred Barber, Hellen Brooks, and Helen Thompson – who stepped up and into those roles in 1925 and established a new normal for representation in our statehouse.

When the time came, my grandpa told me not to run for elected office because, "Well, you can’t win; you’re a woman." As the second longest-serving member of the Assembly this session, I couldn’t be prouder that the people of Kenosha County proved him wrong.

I hope you share my excitement at every election for the right to vote, and the ability to vote for women candidates – not because they are women, but because they have had the opportunity to become the best person for the job – and I hope you can join the Women’s Suffrage Centennial Celebration at the State Capitol on Monday, June 10. The Capitol is open until 10:00 p.m. that day especially for public viewing of the original 19th amendment document as well as women’s suffrage artifacts.

Rep. Samantha Kerkman, R-Salem Lakes, is Majority Caucus Sergeant At Arms and the longest-serving Republican currently in the Wisconsin Assembly.