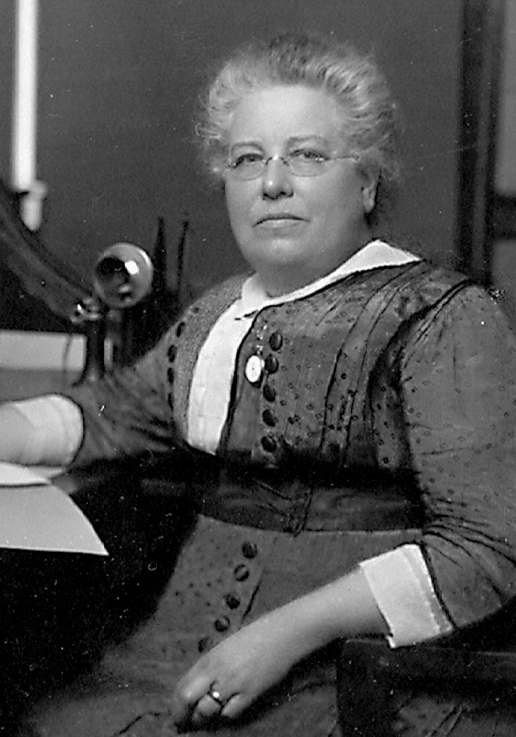 Here in Kenosha, Wisconsin, the name Mary D. Bradford is one that residents are familiar with. The highly regarded educator has a high school named in her honor, Mary D. Bradford High School as well as a church, Bradford Community Church Unitarian Universalist.

Bradford was the first woman superintendent of a major city school system in the state and perhaps the second in the entire country. Most people do not know the other label she wore proudly: Suffragist.

After she became Kenosha superintendent in 1910 at the age of 54, Bradford worked consistently to educate people on the value of granting women the right to vote.

She kept scrapbooks of newspaper clippings about having to do with school issues, her career, and the suffrage movement. If it wasn’t for her scrapbooks, researching the history of Kenosha’s suffrage campaign would have been oh so complicated.

Her Involvement Began in 1911

Bradford helped to organize a gathering of the Associated Alliance of Wisconsin at the Henry M. Simmons Unitarian Church in Kenosha, where she was a member. Representatives of the AAW, an organization of the Wisconsin Unitarian Churches came from all over the state to attend on April 25, 1911.

Later that year on Nov. 17, 1911, she was named committee chair for the Kenosha campaign of the Wisconsin Political Equity League, formed by Wisconsin suffragist Ada James.

Bradford told the audience, "Woman’s suffrage is no longer an academic question to be theorized about – it is a question of ways and means and results. Wisconsin is rather slow in getting into the procession, but it is in it now, and it is for us to see that this opportunity does not escape through inaction."

She would serve as president and first vice-president of the KCESL in the ensuing years.

Adams, who was the first vice-president of the National American Women’s Suffrage Association and involved in the Congress of International Woman’s Suffrage, spoke on the issue to a large audience.

Bradford was all smiles as she introduced Adams to the crowd.

Made Speeches and Wrote Articles

Bradford, too, gave speeches on the merits of women’s suffrage. One speech, made presumably on a soapbox or from an open-top vehicle on the corner of Main and Third Streets in Watertown, Wisconsin on Aug. 16, 1912, as it was reported on by the Watertown Daily Times and the Watertown Gazette.

"My belief in suffrage is based on my experience as a professional woman, upon observation and knowledge of the working woman suffrage in states where it has been tried," Bradford told the crowd.

By this point, women had complete suffrage in Colorado, Wyoming and Idaho.

"Woman’s suffrage has the church and all educational societies in favor of it," Bradford said. "while the liquor interests and associations, the militarists, those favoring child labor, political ring leaders and ’big business’ are against woman suffrage. It is because they cannot rely on women’s vote."

On November 16, 1913, she made a similar speech in Stevens Point, Wisconsin.

At the Kenosha Woman’s Club, the suffrage question was discussed again and again.

Bradford and fellow suffragist Mrs. Charlotte Jordan presented for the pro-suffrage side at a formal debate held at the club in February 1912. After the debate, a secret ballot revealed that 50 women at the event were opposed to suffrage, with 46 women favoring suffrage and 21 unsure.

It was still an uphill battle with the club women even in 1912.

The Kenosha Woman’s Club had an article in the club’s by-laws that said if a woman missed three successive meetings, she would lose her membership in the club.

Bradford, who recounted the incident in "Reminisces of 40 Years of Club Life," decided to test the revision by knowingly missing three meetings.

The board, led by Elizabeth S. Graves, was still intent on the purpose of the rule, paid no heed to the amended article and ousted Bradford.

Shortly after that, the club found itself in a predicament as the Wisconsin Federation of Woman’s Clubs named her as the chairman of their Americanization Committee.

Through correspondence, Bradford resolved the issue by joining the Token Creek Woman’s Club of Dane County. A few years later, she was readmitted back into the Kenosha Woman’s Club.

Looking back, it may be that the club leadership took the opportunity to yank Bradford’s membership because of her rabble-rousing suffrage stance.

Could Affect her Career

In her autobiography, "My Memoirs", Bradford only comments on her suffrage work once and it reveals that her career could have suffered from her stand.

She wrote: "An item in a Milwaukee paper bearing the date of March, 11, 1913, and sent in from Kenosha, gives one reason why some members of the School Board, and doubtless, their constituents back of them, considered me an unfit person for the office of head of the schools. After mentioning the fact that I had just been re-elected [her contract had been renewed] for a fourth year, the item says: ’Mrs. Bradford met with some opposition on account of the strong stand taken on Woman Suffrage.’"

(Taken from the Press Bulletin of the Political Equality League of Wisconsin, 1912)

Mrs. Bradford believes devoutly in the ballot for women and she gives these reasons why:

"I am a suffragist.

"First – Because I have been in professional life for a long time and know from experience the handicap a woman suffers in her effort for advancement.

"Second – Because the influences and forces that are detrimental to social improvement and progress are opposed to woman suffrage, and I do not care to be affiliated with them.

"The only sensible explanation of the opposition is that these detrimental, these evil, causes believe that the woman’s vote will damage the, and right here is found the Third reason for my being a suffragist: I believe that the ballot will increase woman’s efficiency in the fight for a better future.

"Fourth – Because I know that the greatest stimulus to development of a human being is responsibility and I want to see women brought under the influence of that stimulus, that the home and society may receive the benefit which must inevitably result from the greater interest in, and greater intelligence about public affairs.

"Fifth – Because of the taxes I pay for the laws that I obey, I want something to say."